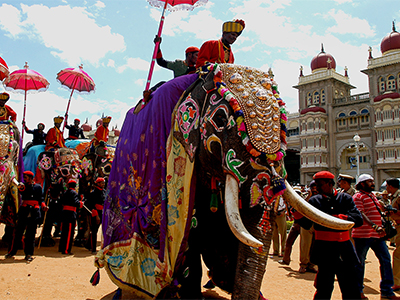 The Colourful Festivities Of Mysore Dasara

The grandeur of Karnataka can be witnessed in its full glory during the Mysore Dasara festivities. This 10-day festival is celebrated with great pomp and show, attracting tourists from far and wide. With magnificent processions, cultural events, fairs, and exhibitions, Mysuru Dasara is India’s most extraordinary Dussehra celebration. The festival is celebrated during Navratri and reaches a grand finale on Vijayadashmi. Whether you are a religious soul or love to explore different cultures and regions, Mysuru Dasara will delight you to the core.
Mysuru was once called ‘Mahishur,’ as it is believed to be the place where Goddess Chamundeshwari (a form of Durga) killed the buffalo-headed demon, Mahishasura. Since then, the nine days have been celebrated with much fervour.

The Jambu Savari or the Elephant procession is one of the most prominent events of this festival. During this procession, 12 trained elephants adorned with colourful attire are taken around the streets. One of them carries Chamundeshwari’s idol atop a golden mandap. The procession starts from the Mysore Palace to Bannimantap. Performances like traditional dances, musicals, and displays of swordsmanship can be witnessed throughout the procession – indeed a sight to behold. As it travels through the city streets, it spreads zeal and joy throughout the city.

The Jambu Savari parade comes to a halt at the sprawling Bannimantap Grounds with a welcoming torchlight parade. This dazzling parade displays the grandeur of the former rules while offering a glimpse of the state’s glorious history. There are spectacular fireworks, bike shows, cultural programs, and laser shows that will leave you spellbound. It is the most integral part of the festival that brings down the curtains for this 10-day Mysuru Dasara celebration.

During this cultural extravaganza, the Mysore palace (the royal residence and the seat of the Kingdom of Mysore) is illuminated with thousands of lights, making it a treat to the visitors. The beautifully embellished palace with around 97,000 bulbs is an unmissable spot while you are in Mysuru to participate in the festivities.

An enthralling exhibition takes place on the Doddakere Maidana. It starts during Mysuru Dasara but remains open till December. The exhibits showcase the cultural and religious heritage of the city most beautifully. You can also buy clothes, kitchenware, and other souvenirs. There are a lot of options for entertainment as well, such as Ferris wheel and other thrilling rides. Apart from this, you can enjoy mouthwatering delicacies and authentic cuisine. After all, a festival always remains incomplete without delicious food.

In Mysuru, Dussehra marks the victory of Goddess Durga over the devil, Mahishasur. Thus, this festival is celebrated to honour the Goddess in her warrior form. The idol of Chanundeshwari is worshipped in the Mysore Palace by the royal couple before the Jambu Savari. You can also participate in various rituals and poojas that are held in numerous temples across the state.

Wresting has always been an integral part of the traditional Dasara festivities. The Nada Kusti event is a significant attraction that aims to promote this classic art. Wrestlers from across the country compete to win the titles. Witnessing a wrestling event can be a once-in-a-lifetime experience for many.

Mysuru Dasara Flower Show is one of the most prominent attractions, drawing visitors from different parts of the country. This show usually takes place in Nishad Bhag or Kuppanna Park. An exquisite collection of flowering plants is showcased during this event, offering visitors a visual treat. The pristine beauty and colourful environment of the Mysuru Dasara Flower Show are hard to resist.

During the ten days of Mysuru Dasara, you can find a plethora of events and celebrations held throughout the region. From sporting events and film festivals to heritage tours, yoga, and wrestling. These events will keep you entertained during these ten days.

Another integral part of the Mysuru Dasara festivities is the Cannon Firing. The 21-gun salute is carried out as a mark of paying respect to the Chief Guest. Amidst the sound of cannon fire, the Jumbo safari traces its path with music bands and dance groups. The City Armed Reserve police personnel carry out this salute when the National Anthem is played. Before the Mysuru Dasara celebrations, rehearsals are conducted to make the elephants and horses familiar with the loud sound. The state has preserved its age-old tradition, adding more charm to the festival.

Things To Explore During Mysuru Trip

In view of the pandemic concerns and safety guidelines, the Karnataka government has decided to celebrate this festival in a traditional and simple way in 2021. All the rituals and ceremonies will take place while following COVID-19 guidelines.

The Mysuru Dasara Festival is an all-encompassing experience for all the tourists visiting the city at this time. This year, the festival will begin on October 7. So, get ready to indulge in awe-inspiring festivities and colourful surroundings. After all, celebrating Dussehra in Mysore might be the most memorable experience that you will cherish for a lifetime.

How To Reach Mysuru Palace